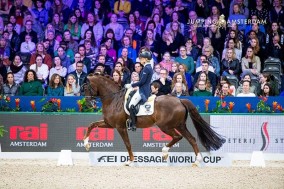 “The basis for a talented star”

Foundation is a modern sports horse as experts nowadays like to see. He possesses an exceptional character and the gaits to go with it. In 2013 he attracted attention during the KWPN performance tests, thanks to his exceptional walk. The judges rewarded his walk with a nine. Foundation moves with much elasticity and has a good contact. He thereby gives his rider a good feeling.

Dam Wiana has high scores in the studbook and carries the ster and preferent predicates. In addition to Foundation she produced the two keur mares Ciana (by Tuschinski) and Eva Wiana (by United). Granddam Liane also guarantees top sports horses. Her first foal was an immediate hit, it was the KWPN stallion and Krack C-son, Redford. She has also produced a further three sport horses who are competing at Z2-level.

Read here the newsarticles about this stallion: